Experiments with magnets interacting with other magnets

This is made with seven donut magnets placed N to S to N to S.  Then, three are placed N to N and S to S.  A wooden dowel, about 1/4" in diameter, is glued into two 2" by 2" blocks after the magnets were placed on it.   A trick to make this look good is to make the dowel rod just a little smaller than the inside diameter of the donut magnets.  If the dowel is too small, the magnets will sit at an angle.

Dowling Magnets has a nice collection called "Floating Magnet Rings" pictured here.  A clever touch is that they place an "O" ring between each magnet ring so they don't bang against each other and break.  One of the donuts on my set broke when someone shook the assembly up and down.  The "O" rings would help with that.

This is a great exhibit to play with, causing the three floating donuts to bounce, or turning them upside down as shown above and still seeing a gap between the three floaters on the bottom.

Again, this demonstrates the repulsion between like poles and attraction between unlike poles.  It provides a way to feel the strength of the repulsion as the distance varies.  It also shows a way to levitate objects as long as they are constrained from flipping over.

This is a simplified diagram showing the areas of attraction and repulsion between the magnets for this experiment. 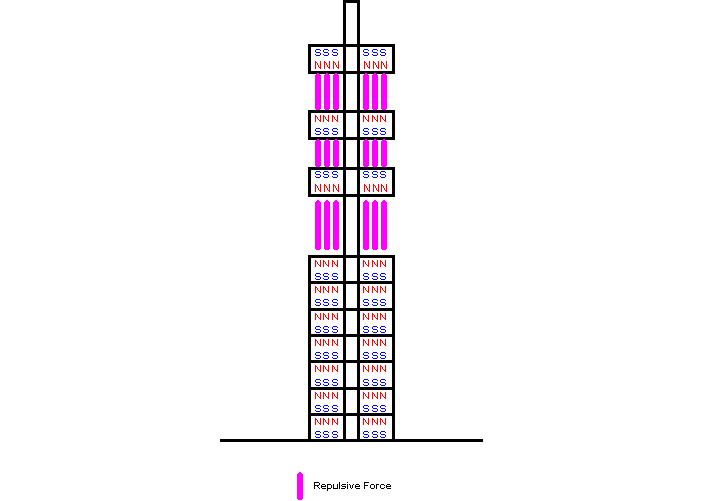