Experiments with magnets and conductors

This is an excellent demonstration of Lenz's law and eddy currents.  When a magnet is dropped through a vertical copper pipe, it falls much slower than a steel ball would.  Its rate of fall quickly reaches a terminal velocity and it takes much longer for it to fall out of the other end than a steel ball would take.

There is nothing that has to be built or put together for this demonstration.  All that is needed is a strong magnet (for example, a NIB measuring 1/2" diameter, about 1/8" thick) and three or four copper pipes of different sizes.  The following table details the copper pipes I used:
(the air gap is the space between the magnet and the inside wall of the pipe)
(all of the pipes except for the special thick wall pipe can be obtained from most hardware stores)
(the 5th pipe in the picture is actually a red brass thick walled pipe, not as good a conductor as the copper one, number 4)
(the two thick-walled pipes were obtained from Central Wire and Steel.  Cost is $250 for a 12' piece!)


This is used to record the time it takes for a steel ball and a magnet to fall from one end of the pipe to the other.

To help catch the ball or magnet as it falls out of the pipe, I place an empty plastic butter dish under each pipe, asking the volunteers to keep the bottom end of the pipe over the dish.  This also helps as an audio cue as to when the object has exited the pipe, so the stop-watch person can stop the timer.

I start with the steel ball.  When I say, "Ready, set, GO!" I am holding the ball at the top edge of the first pipe.  On "GO!" I let go of the ball and let it fall.  At that same instant, the stop-watch person starts the timer.  When the ball hits the dish on the floor, the stop-watch person stops the timer.  It takes a few tries to get an accurate reading.  Do this a couple of times for each pipe, having the recorder note the times on the sheet of paper.

Next, I bring out the magnet.  Before I do anything, I ask the audience if the magnet will take the same time, less time, or more time than the steel ball did.  I then give reasons why each one may be valid.  For example:
a.    Same time, because Galileo proved in 1600 from the Tower of Pisa that all objects fall to earth at the same rate due to gravity.
b.    Less time, because the earth is a big magnet and will attract the smaller magnet to it, pulling it down faster than just with gravity.
c.    More time, because the magnet has a flat side to it which will cause it to fall slower due to the air resistance.

Now I hold the magnet in position, ready to drop it, and say, "Ready, set, Last time I tried this the magnet never fell out because it got stuck on the rough edge of the pipe where I cut it off.  But as you can see, I removed the roughness to the edge."  (This was to get the stop-watch person off balance and start timing.)

Then I say, "Ready, set, You need to be ready with the stop-watch because it may not take very long before it falls out!"  (Again, the stop-watch person would have falsely started timing, keeping him on the edge of his seat.)

Finally I say, "Ready, set, GO!" and drop the magnet into pipe 1.  Everyone will be surprised to see that it will take longer than the ball to fall through the pipe.  We'll scratch our heads and wonder why it took so long!

Then we do the same thing with pipe 2.  This will have an even more dramatic effect on the speed at which the magnet falls.  Pipe 3 will be more dramatic still.  Pipe 4 will seem to take forever!

The times noted should be close to the following table:

Try the same experiment with two magnets stuck together.  Try it with two magnets glued North to North (it should fall slower still).  Are you able to get an aluminum pipe to compare the rate of fall?  Since you know the length of the pipe and how long it takes to fall through it, you can figure out its speed (terminal velocity).

I made a handy demo unit with a 30" piece of copper pipe, glued a Plexiglas window to each end (the windows have a 1/8" hole in the middle to maintain air pressure equilibrium) with a NIB magnet inside of it.  Then I taped a 6" piece of pipe foam to each end to protect the glued windows.  That's the photo on the left.

The photo on the right is the view of the magnet as it drifts down the length of the pipe.  Watch the magnet as it falls through the pipe.  You'll see it slowly float down, moving in a small circular pattern as it falls.  It's really cool!
The magnets can be obtained from Arbor P8-1123.
There is an Eddy Current Kit available showing this same effect, but not as cool, from EdIn M-200.

This is a simplified diagram showing the areas of attraction and repulsion in this experiment. 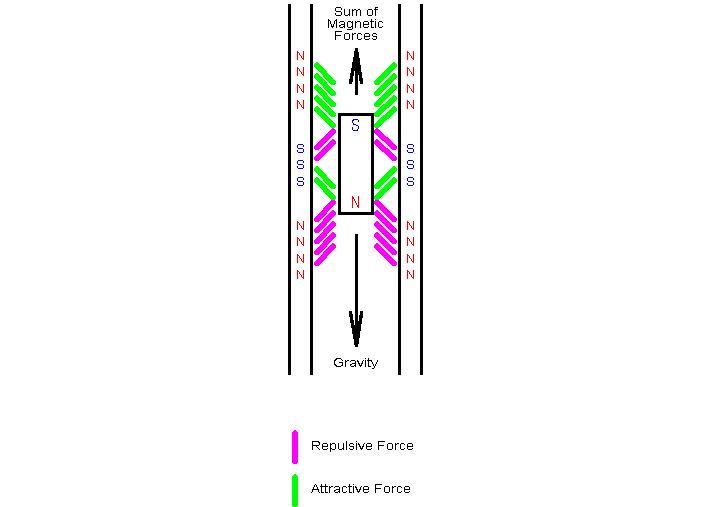 Now, I'm not 100% certain if the fields really do look this way.  I used a piece of magnetic viewing film held to the outside of the copper pipe, and watched as the magnet slowly made its way down it.  The magnet was only 1/8" thick.  What I observed was a single transition from North to South, not two as I show in the above diagram.  This certainly requires more investigation.

Some of the suppliers given here have kits made up with a section of copper pipe and a magnet that you can use to perform this demonstration.
I've seen some pipes with a slot machined into the wall of the copper pipe so you can visually see the magnet slowly falling through the pipe (the speed is slightly affected, but not too much).

As seen in the photo above, this can also be demonstrated using an aluminum pipe.  This pipe is 12" long, 1.5" OD and 1" ID with 0.25" thick walls.  Two spheres come with this kit - one is a NdFeB magnet, the other is a steel ball.  The typical fall time is 4sec with the magnet, and only 0.25sec for the steel ball.  This kit was from http://www.amazingmagnets.com/c-184-eddy-current-demonstrator.aspx and costs about $20.  A nice kit!

Use the equations of motion to determine the time for the steel ball to fall through the pipe.  Use the second equation where si = 0, vi = 0, so time = sqrt(2*(distance, ft)/32).
Equations of Motion (from http://en.wikipedia.org/wiki/Equations_of_motion and other sources):

where initial values are:

is the body's initial velocity

is the body's initial position

and final values are:

, the final velocity at the end of the interval

, the final position at the end of the interval (displacement)

, the time interval between the initial and final states

, the constant acceleration, or in the case of bodies moving under the influence of gravity, g
(32 ft/sec/sec or 9.8 m/sec/sec)