The study of the magnetism found in the planets and the sun of our solar system has been a very exciting field during the last 100 years.  See Magnetic Monitoring of Earth and Space by Jeffrey Love.

Of course, trying to understand the magnetism within our own planet earth has been going on for a very long time, and only recently (within the 1990s) has a reasonable model been made which closely mimics how the magnetic field is created and how it changes over time.   Recently, it has been determined that the core of the earth's core rotates about 0.3 to 0.5% faster than the crust, which may have an effect on the magnetic field generated.  There are also models of the expected strength and direction of the magnetic field seen on the surface of the earth at various locations.  But there is more to the  Earth's magnetic field than what we can measure at various locations on its surface. There is also the effect the earth's magnetic field has on the solar wind coming from the sun. The solar wind is what the stream of particles created by the sun is called. It travels as fast as 1.7 million miles per hour (800 km/sec) and goes out in all directions from the sun! When special eruptions occur on the sun, we can measure the effects on Earth about 52 hours later. Several scientists have been studying the strength of the magnetic field of the Earth out in the space around our planet, and have been able to obtain a good understanding of its shape and how it varies over time. Did you know that the aurora borealis ("Northern Lights") is caused by the Earth’s magnetic field and its interaction with ionized particles? Amazing stuff, isn’t it? 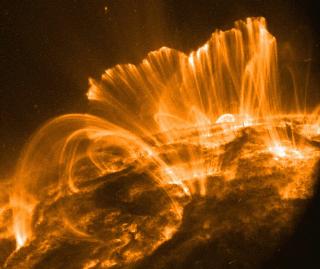 (from Astronomy Picture of the Day) 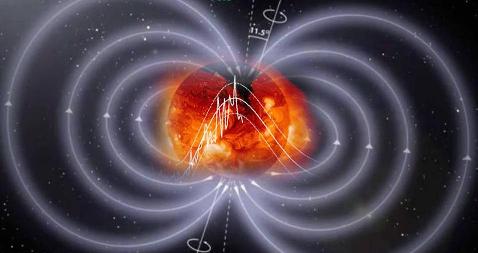 Studying the sun, especially the sun spots and the massive flares and eruptions happening on the surface of it, has shown that magnetism plays a major role in the life of our star. The sun goes through an 11 year cycle of sunspot activity.   Actually, it's a 22 year cycle, because at the peak of the activity is when the magnetic field created within the interior of the sun flips, just like the magnetic field of the earth has flipped in the past.  That's what creates the sunspots, just like the odd magnetic poles that are created when the earth is partway through its field reversal.  Here are some great sites which describe the studies going on. Did you realize that the scientists are able to measure the strength of the magnetic fields on the sun by carefully measuring the absorption lines seen in the color spectrum from the light from the sun, in the areas of the solar flare. When the light is exposed to a strong magnetic field, the spectrum lines will begin to split into two or more lines! The amount of the split is proportional to the strength of the magnetic field. This is called the Zeeman effect.  The next flip should happen in 2024.

A video about magnetic stars:  http://hubblesite.org/newscenter/newsdesk/archive/releases/2001/19/video/a

What do we know about the other planets and the moons in our solar system? Quite a bit. Most of the satellites and space probes sent out have instruments on them to measure the magnetic field in the vicinity of the space probe. (Arthur C. Clarke’s book and movie "2001" was based on the fictional event of finding an object buried on the moon’s surface. In the story, this object was found when the scientists were performing a magnetic survey of the moon’s surface, and noticed a very strong anomaly at a particular location.) A close friend of mine, Herman Eckelmann, the pastor of the church I attended while at Cornell University, worked as a research associate with Frank Drake, Tom Gold and Carl Sagan at the Center for Radiophysics and Space Research. He holds a patent for one of the instruments used on satellites to measure the magnetic fields in space.

As you know, several tons of meteorite dust falls to earth due to the debris from meteorites and micrometeorites. There are several sites that talk about ways to collect some of this dust. Many meteors have a high iron and nickel content, which makes them ferromagnetic.

Check these sites out for more details:

http://www.pbs.org/wgbh/nova/teachers/activities/3111_origins.html
(a great site with all the info you need!)

I was able to purchase a meteorite that was found in Argentina.  It it highly ferromagnetic, so it sticks strongly to a magnet.  It cost about $65 and weighs 31g.    Contact hoeg.todd@yahoo.com, who owns the Natures Treasures store in Eureka Spring, AR, and in Branson, MO, if you are interested in obtaining a nice sample.

This takes you to the PBS online store where they have several items of interest, including NOVA: Magnetic Storm, on VHS and DVD, about solar flares and Earth's magnetic field.

Another great show is the NOVA:  Secrets of the Sun. 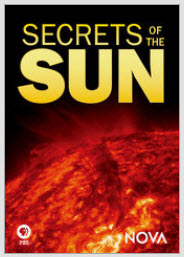